Additional TLEX I2V 2.0 “bits and pieces”
In addition to the surveyable dashboards and KPIs in the renewed user portal, the TLEX I2V platform also offers additional interfaces, can be adapted to various message types and has recently been expanded with standard-compliant messages such as ETSI messages and upcoming C-Roads standards.

TLEX I2V 2.0 offers additional interfaces that can be adapted to various message types and has standard-compliant messages such as:

This way the platform offers even more flexibility in messages, message types, and interfaces. Consequently, a multitude of use cases can be supported by the platform.

There are also additional options for configuring access to certain objects and data flows. Road authorities and other owners of roadside systems can now define their own access policies and link them to their systems. Through these policies, they can determine which parties have access to the data of their objects. This allows maximum control for object owners and road authorities.

In short, with the addition of these extra functionalities, the TLEX I2V platform gets a significant upgrade and is ready for the future.

In the middle of last year, the storage of metadata for the TLEX I2V platform was further expanded to better serve our customers. Subsequently, in the first half of 2020, the platform has been equipped with dashboarding functionality and automated KPI monitoring. This enables the clear and integrated display of the data into the user portal.


For example, the TLEX I2V dashboards provide insight into:

TLEX I2V has also been extended with alerting functionality; for all KPIs, it is now possible to set alerts. Depending on the settings, users are periodically (eg. daily) given a list of current deviations from set limit values.

Monotch partners are also given the option to define additional dashboards, and thanks to the “single sign-on” layer, partners can also make additional data and analyzes accessible in the user portal.

Initially, the platform was developed for connecting intersections and facilitating data exchange with traffic lights. In the new TLEX I2V version, it is now also possible to connect to other roadside systems. For example, in this new version, roadside systems such as traffic lights, matrix signs, text carts, and WIS cars are given a “type designation”, and the properties, governance, and quality controls can now vary based on the type of roadside equipment. New types of roadside equipment now identifiable on TLEX I2V includes systems such as matrix signs, text carts, or access barriers. 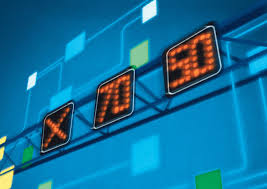 Additionally, the limits, quality controls, and other properties are now also differentiable per object and/or domain. This type of differentiation has also been implemented in the screens and reports, for information such as variable names. This enables a more complete support & representation for other types of roadside equipment on the TLEX I2V platform.

Connecting all kinds of roadside equipment with ultimately the road users leads to many advantages for traffic flow and traffic safety on the Dutch road network and the safety and comfort of road users. The new dashboarding functionality was initially developed at the request of other European regions, but the new features are of course also available to Dutch customers.

TLEX to the max
Monotch recently completed a series of large scale stress/performance tests for our TLEX I2V platform. After several months of preparation, we tested almost non-stop for 2 weeks and concluded with very successful results. We were not only able to prove that TLEX I2V is efficiently horizontally scalable in very large-scale deployments, but we were also able to test several software improvements extensively, and objectively establish that we achieve an even higher degree of efficiency.

Those who have been following Monotch for some time know that we are busy connecting all kinds of roadside objects to, ultimately, the road user. In essence, this means exchanging large amounts of messages in as little time as possible. That of course being done reliably, safely, and with the application of the necessary governance rules.

We now dare to say that we have mastered that data exchange ‘trick’ quite well. After all, we currently deliver more than 500 million messages every day, which boasts an average of one millisecond per message. This feat is something to be proud of, but not a surprise to the Monotch team as it is fully in line with the results of the performance tests that we have carried out with every change of the platform since 2017.

But we love a challenge and now that we support more and more types of objects and spread our wings to more and more countries, it was time for a new large-scale test session, christened ‘TLEX to the max’ internally.

First of all, the question was of course what ‘the max’ means in this case. After a healthy discussion, we decided to start from a setup of 7,500 data-providing intersections, 10,000 ‘lighter’ objects (think of road- side units, access barriers, road sensors) in combination with 5 million data-providing virtual road users and 20 ‘data-consuming’ service providers. In other words, about 95 billion messages delivered per 24 hours. All in all, a setup where we can support the entire Benelux as C-ITS services are rolled out on a large scale.

This was also when the financial people of Monotch began to worry. Because, in addition to a test environment that makes it possible to process the planned huge amounts of data, an environment was also needed to generate these messages. After all, we can only test objectively if this data is generated outside the platform. Fortunately, our various partners were willing to co-invest in ‘TLEX to the max’ and we were able to get a green light here, albeit with a (fortunately substantial) maximum of computing capacity. This somewhat changed the purpose of the tests, namely to “how much load can we process with the available test capacity?”

In addition to determining the required computing capacity for large-scale deployments, we mainly wanted to obtain certainty about the result of several improvements that we have developed for the core of TLEX I2V. That is why various test scenarios were composed in the preparation, consisting of varying loads, varying settings, and different TLEX versions.

The execution of the tests was certainly not routine. As we increased the load further, various bottle-necks were gradually confronted, particularly in the additional components such as governance and monitoring. These are valuable items that during the test period directly led to several reinforcements of the platform. In addition, we were able to determine that some software changes turned out to have a substantial positive impact on the efficiency of the upscaling, while retaining the ‘near zero latency’ character of TLEX I2V.

After we had carried out all planned tests, we continued to increase the numbers for a while: in the end we connected nearly 11,000 fictitious intersections with 10 million road users. Average latency? 5 milli-seconds ……

Bring on that C-ITS scale-up, TLEX I2V is ready!

Need more information or a demonstration?

We'd love to help you